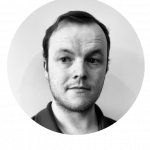 Senior iOS Developer in charge of their customer facing apps. The Customer app is written in a combination of Swift and Objective C and uses many open source frameworks. I also work on the backend that consists of Ruby and Go.

I was part of the initial team that built the new Laterooms iOS app. Worked with an external agency initially for the initial build before bringing it all in-house. Worked in an agile team consisting of 2 iOS Developers, 2 Android Developers, 2 Testers, 1 Business Analyst and 1 Product owner.

Spent a small amount of time building a proof of concept app for their online food business.

Worked on various project for Apadmi’s clients, that ranged from Websites, apps to complex cross-platform apps. Learned to use a variation of languages, like C#, C++, Java to name a few.

I am an avid Senior iOS Developer currently working remotely for Fatsoma Ltd. from the comfort of my own home in North Wales. I like the countryside a lot and enjoy being outdoors.

Why not contact me using the details above and can sort some kind of pricing structure.

I will post some examples below once I’ve finished some client websites.